If you are interested in having Dr. Weiss give a lecture on holistic medicine, hormones, endocrinology or another topic, please contact the office at 760-753-3636 for further information.

If you would like to see more health related articles chosen by Dr. Weiss, visit this link

Webinar: You Are What You Eat
Dr. Weiss is a panelist on Cambia Health Solutions' Webinar providing valuable insights on mindful nutrition.

Dr. Danielle Weiss followed in her parents' footsteps when choosing the medical field for her professional career. Her mother, Dr. Nancy Weiss, is a reproductive endocrinologist and her father, Dr. Joseph Weiss, a gastroenterologist. Read more....

Humans are never alone. Each of us co-exists with trillions of microscopic organisms that form the human microbiome, a complex web of life that's analogous to earthly biomes such as deserts, tundra and rainforests. The microbiome extends from deep within our bodies - even inside individual cells - to the skin and to all surfaces exposed to the external environment. Read more....

When the average American goes to the doctor, shows up at the ER, or enters the hospital, the risks and complexities of our healthcare system strike home vividly. Besides the expense of care and the intricate tests and procedures a patient faces, there is a widely under-reported risk of medical mistakes and "adverse events," as they care called, which can range from minor to disastrous. Read more....

What You Need to Know About Osteoporosis
By Danielle Weiss, MD, FACP

As you get older, your bones can begin to deteriorate. Learn the signs of osteoporosis, how you can help slow its progression, and how to maintain and build back healthy bone. Read more....

4 Common Sources of Fatigue -- and How to Re-energize
By Danielle Weiss, MD, FACP, Edocrinologist

Fatigue is a lack of energy, motivation, and/or concentration. The first step in reducing fatigue is to realize that it is your body, mind, and spirit's way of telling you that something is out of balance. Read more....

An Inside Scoop on the Pros and Cons of Ice Cream and Other Frozen Treats
By Danielle Weiss, MD, FACP, Edocrinologist

The heat is on, which means cold treats are in season. Before you indulge in that scoop of ice cream or gelato, learn what's inside these frozen treats, their benefits, and their drawbacks.. Read more....

8 Reasons You May Be Gaining Weight Even If You're Eating Healthy
By Danielle Weiss, MD, FACP, Edocrinologist

As a practicing endocrinologist, my patients frequently ask why they continue to gain weight even when they're eating healthy. There's rarely a simple answer. A myriad of factors can contribute to weight gain among individuals who believe they're eating wholesome foods. It's not just what you eat,.... Read more....

Other Interesting Articles in the News

A Heart Risk Factor Even Doctors Know Little About
To millions of Americans, Bob Harper was the picture of health, a celebrity fitness trainer who whipped people into shape each week on the hit TV show "The Biggest Loser." But last February, Mr. Harper, 52, suffered a massive heart attack at a New York City gym and went into cardiac arrest. He was saved by.... Read more....

Exercise May Enhance the Effects of Brain Training
Exercise broadly improves our memories and thinking skills, according to a wealth of science. The evidence supporting similar benefits from so-called brain training has been much iffier, however, with most people performing better only on the specific types of games or tasks practiced in the program. But an interesting new study published in the Journal of Cognitive Neuroscience suggests.... Read more....

How to Be Healthier, Happier and More Productive: It's All in the Timing
You're probably getting ready to make a few New Year's resolutions, solemn promises to yourself to behave better in 2018. You might have pondered how you're going to accomplish those goals, who could help you and why you need to change. But if you're like most people - and social science suggests that you and I are like most people - you've.... Read more....

Harvard neuroscientist: Meditation not only reduces stress, here's how it changes your brain
Sara Lazar, a neuroscientist at Massachusetts General Hospital and Harvard Medical School, was one of the first scientists to take the anecdotal claims about the benefits of meditation and mindfulness and test them in brain scans. What she found surprised her — that meditating can literally change your brain. She explains: Read more....

More Consensus on Coffee's Benefits Than You Might Think
When I was a kid, my parents refused to let me drink coffee because they believed it would "stunt my growth." It turns out, of course, that this is a myth. Studies have failed, again and again, to show that coffee or caffeine consumption are related to reduced bone mass or how tall people are.

Coffee has long had a reputation as being unhealthy. But in almost every single respect that reputation is backward. The potential health benefits are surprisingly large. Read more....

Consuming Excessive Soda May Cause Cancer
Consumption of too much soda may cause cancer, says a new study published online in the journal PLOS One. It has been found that about half of the Americans, above 6 years of age, are probably exposing themselves daily to a cancer-causing carcinogen. Previous studies have revealed that the human carcinogen 4-methylimidazole (4-MEI) is present in a number of sodas having caramel coloring. This cancer causing compound is sometimes produced during the manufacture of sodas. Read more....

Fat map: largest genetic blueprint of obesity revealed
Scientists have uncovered more than 90 new gene regions that could help explain why some people are more likely to put on weight than others. The team scoured DNA libraries of more than 300,000 people, constructing the largest-ever genetic map of obesity. Looking for consistent patterns they found a link with genes involved in brain processes, suggesting obesity could partly have a neurological basis. Read more.... 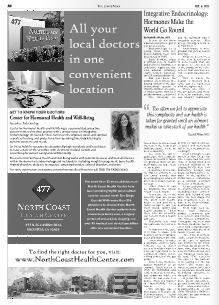 Integrative Endocrinology: Hormones Make the World Go Round
If you do not know what an endocrinologist is you are not alone. Endocrinology is a young field, with hormones having been first discovered in 1905. Each hormone plays a critical role in health and wellness. Examples of endocrine organs are .... Read more.... [Follow link and skip to Page A6]

Diabetes Technology
Home medical devices, as opposed to fitness products like activity-measuring wrist bands, have too often been stuck in the past, even as smartphones have zoomed ahead on hardware and software. A prime example is the device used by diabetics, a small gadget called a glucometer that analyzes a tiny drop of blood. Diabetics usually use these several times daily .... Read more....

Exercise as Potent Medicine
Exercise can be as effective as many frequently prescribed drugs in treating some of the leading causes of death, according to a new report. The study raises important questions about whether our health care system focuses too much on medications and too little on activity to combat physical ailments. For the study, which was published in October in BMJ,.... Read more....

Click here for more interesting articles on health and well-being.

Health Lecture Topics by Dr. Weiss
If you are interested in having Dr. Weiss give a lecture please contact the office at 760-753-3636 for further information.

In 2012, Dr. Weiss presented "A, B, C, D's of Diabetes" at the 2012 Distinguished Speaker Series, presented by Scripps Health Foundation.


Menopause is a natural part of a woman's life - with more than 70 percent of women experiencing symptoms. Join Danielle Weiss, MD, FACP, for the latest information on alternatives to hormone replacement therapy, complimentary approaches, and non-hormonal pharmaceuticals and treatment options. Also, learn how lifestyle changes, combined with diet and supplements can benefit you by alleviate unpleasant symptoms and improve the quality of your life.

Click here for the FDA news release, "Breast thermography not a substitute for mammography - Telethermographic, 'infrared' devices not approved for primary cancer screening"